Gary Jones and Megan Simpson talk about how they met and how they dealt with the difficulties of a long distance romance.

Jill Rutan Hoffman speaks to local high school seniors about how education has allowed her to achieve her dreams, especially in aviation. (Courtesy photo)

“5/1/2013 – EDWARDS AIR FORCE BASE, Calif. — The Mojave Transportation Museum and the Mojave Chamber of Commerce held their 11th Annual Excellence in Academics Recognition Bangquet April 24 at the Mojave Veterans Building. The banquet recognizes high school seniors who achieved a 4.0 Grade Point Average from five East Kern County high schools, which includes Desert Junior Senior High School. Col. Lawrence Hoffman, U.S. Air Force Test Pilot School commandant, along with his wife Jill, were guest speakers at the event. Both Hoffmans talked to the aspiring teenagers about how “education is the key to unlock your future.” Both Col. Hoffman and Jill grew up around the Antelope Valley (graduating from Desert High School and Quartz Hill High School respectively) and both attributed their success and being able to follow their aviation dreams through their educational achievements.” (Read article Edwards Air Force Base)

Who are the Ninety-Nines? 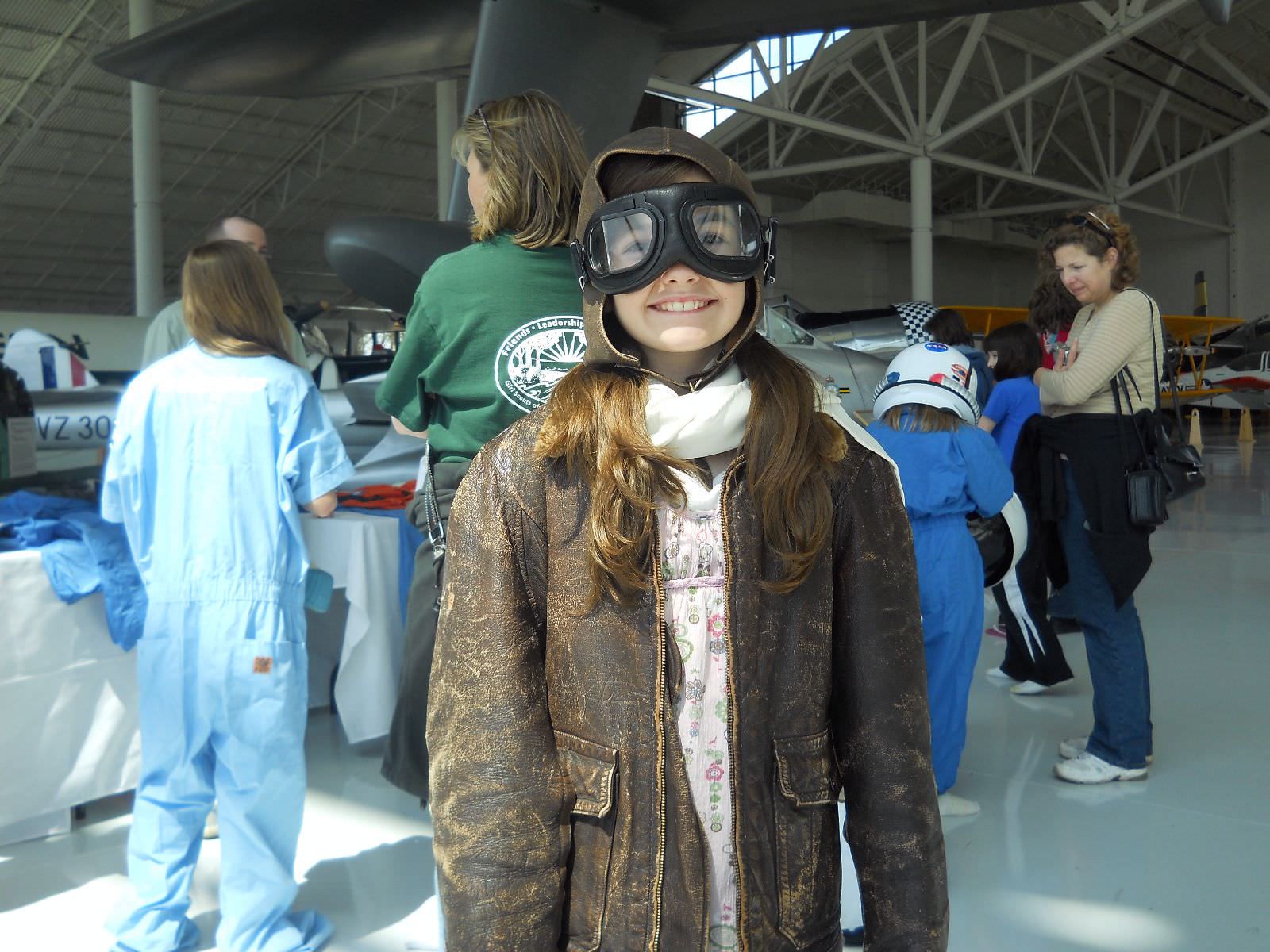 “THE NINETY-NINES, INC., is an international organization of licensed women pilots from 35 countries – we currently have thousands of members throughout the world. We are a non-profit, charitable membership corporation holding 501(c)(3) U.S. tax status. Our International Headquarters is located in Oklahoma City, Oklahoma. Although there are other female pilot organizations in various states and nations, virtually all women of achievement in aviation have been or are members of The Ninety-Nines.

The organization came into being November 2, 1929, at Curtiss Field, Valley Stream, Long Island, New York. All 117 American female pilots had been invited to assemble for mutual support and the advancement of aviation. Louise Thaden was elected secretary and worked tirelessly to keep the group together as we struggled to organize and grow until 1931, when Amelia Earhart was elected as first president and the group was named for the 99 charter members.

Our Headquarters, located in a two story building complex on six acres at the Will Rogers World Airport in Oklahoma City, Oklahoma, is home to our large archival records, video oral histories, personal artifacts, collections and memorabilia, and biographical files on thousands of women pilots from around the world. This is also the site of our 99s Museum of Women Pilots.

Please stop in if you are in the area. Our business hours are 9:00 AM to 5 PM Monday – Friday or by appointment.” (Read article The Ninety-Nines)

“Judy Cooperberg, our Antelope Valley executive director, was appointed by Los Angeles County Supervisor Michael D. Antonovich to the Los Angeles County Mental Health Commission to serve a three-year term. Along with 15 other commissioners, Judy is tapped to advise the Board of Supervisors and the county’s mental health director on various aspects of local mental health programs.

The County’s Fifth District is a vast area which includes all or parts of the San Gabriel, Pomona, San Fernando, Santa Clarita and Antelope Valleys. “Judy brings over 30 years of mental health advocacy experience to the commission. She is a problem solver and will be a great asset to the commission,” said Antonovich.

“I am honored to be appointed to the Commission. It is a tremendous opportunity for me to advocate for the Antelope Valley community’s mental health needs and ensure that they are taken into consideration,” Judy commented.

At MHA, Judy is responsible for the development of recovery programs for adults, young adults, veterans and homeless individuals and families in Antelope Valley. She is a certified psychiatric rehabilitation practitioner (CPRP) and sits on many charitable and community boards and committees in Antelope Valley.” (Read article Mental Health America Los Angeles)

“Butler’s Coffee, the Antelope Valley’s most happening java joint, has music every Saturday night, plus plenty of other music and other activities and entertainment scattered throughout the calendar.
Our music program has been, by almost any measure, a huge success. We’ve already had some great performances from various local and LA area acts since we’ve opened; folks like Tracy Newman, The Willard Grant Conspiracy, Katy Moffatt, John Zipperer & Friends, Shotgun Granny, Chuck Roberts, Men of Worth, Shakeh, Doug Moon, Barn Burning, Allie Taylor, Ian McCartor, Shotgun Granny, Ryan Beuder, Julian Corpeño, Julia Jordon, The Keeftowne Blend, Silent Planet, Laura Browne-Sorenson, Luis Narino and The Browne Sisters & George Cavanaugh.
Can’t wait until showtime? Why not check out our very first video? This YouTubeClip shows Allie Taylor and band putting their stamp on a Katy Perry number at Butler’s back (way, way back) in November 2008.
So don’t just sit there at home, vegetating. Check out our Calendar. We have music most Saturday nights and we’re adding more nights (and a few matinée shows) as we go.
Have a club? Meet here…” (Full article via Butler’s Coffee House)

Edwin R. Vasquez talks about the artist community in the Antelope Valley

Thoughts and images from the semi-fictional city of Los Angeles

“You’ve seen this movie before.

A pair of young city-dwellers drive out into “the country” to explore some remote curiosity. Maybe they’re on the way to visit a relative, or tracking a local legend, or – in the most hopeless cases – taking a “shortcut” to some commercial-friendly vacation destination. Whatever the case, the movie doesn’t end well. They make a wrong turn, pick up the wrong hitchhiker, get trampled by Lady Luck and/or Mother Nature before being tortured and killed by giant insects or an inbred family of hungry cannibals.

Oddly, this type of movie frequently gets shot in Antelope Valley, about sixty miles north of L.A. Driving through, it’s not hard to understand why. The high desert landscape is naturally forbidding. Strong winds stir up dust devils in the rocky sand and the only signs of life are Joshua trees – which don’t grow big enough to provide shelter from the sun. Here, a person is completely vulnerable to the elements. The population of the valley – concentrated mostly in the western cities of Palmdale and Lancaster – is growing fast, but settlements to the east still appear inhospitable. One gets a profound sense of loneliness on the empty roads, and hopes that this is not the day the radiator overheats or a tire blows out… because, as Hollywood has proven, this is the perfect place to disappear.
END_OF_DOCUMENT_TOKEN_TO_BE_REPLACED

“LANCASTER — It began in 1968 with a 15-mile run by Griffith Park and through the streets of nearby Burbank on a hot July afternoon that Mark Covert can remember like it was yesterday.
It ceremoniously concluded Tuesday with the final steps taken just outside Marauder Stadium on the Antelope Valley College campus surrounded by several friends, family members, student-athletes, coaches, former teammates and running enthusiasts from around the country.

END_OF_DOCUMENT_TOKEN_TO_BE_REPLACED

Los Angeles — Amidst unfolding allegations against several NFL players, City Attorney Mike Feuer today called for a change to the national conversation and a comprehensive approach to end domestic violence. Feuer was joined by Chief Charlie Beck of the LAPD as they called for victims to come out of the shadows and report domestic violence crimes and seek help.

“Domestic and family violence isn’t just an NFL problem. It’s a fact of life in too many homes across our nation every day,” said City Attorney Mike Feuer. “We can and will do more to break this cycle of violence. And victims need to know they are not alone–that we will stand up for them and help protect them.”

END_OF_DOCUMENT_TOKEN_TO_BE_REPLACED

Tim Youd hanging over The Blvd